The School of Athens: A Representation of the Renaissance in the Form of Art 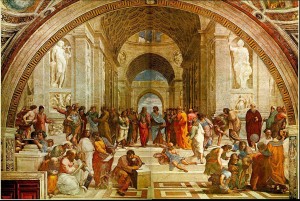 The fresco “School of Athens” by the painter Raphael is regarded by many as one of the greatest masterpieces of art man has ever created. It represents the spirit of the Renaissance in a thought-provoking way. The work reflects how humanism and the love of man has penetrated the Christ-loving Middle Ages and the separation between reason and faith, religion and science.

First of all, one can be quick to note that unlike previous art, Christ is not depicted anywhere in the painting. Instead the focus is towards Aristotle and Plato debating in an almost church-like room, showing how the people of the Renaissance regarded the ancient pagan scholars very highly. Everyone surrounds Aristotle and Plato and is connected to them in a radial pattern with invisible rays extending from the center out, showing how Aristotle and Plato are the focus of the painting. The old philosophers teach the young and eager, representing how young people of the Renaissance were disciples of the old, a classical idea from antiquity.

Also, one can easily see the Greek gods and general architecture that the painting contains. The gods not only represent what the people in the painting believe, but they also show how the people of the Renaissance cared about, almost worshipped, the Greek culture. They thought of the Greeks and Romans as having the greatest inventions and knowledge in history and thought that their monuments could never match those of antiquity. The architecture also exemplifies this – arches are used throughout the painting, lots of marble was characteristic of Roman times, and the setting of being in the School of Athens also shows this.

Finally, we can see everyone’s desire to grow in knowledge. Alcibiades, for example, listens intently, although he is strong and does not seem like the type to be interested in it. He represents how everyone, not just scholars, desired knowledge and craved it. Many listen intently to Aristotle and Plato, for they are like a shining beacon of knowledge in a world of blindness.

All in all, the painting reflects the desire for a return to antiquity and classicism; it glorifies the ancient learners of the past and shows how everyone, including Raphael, wanted to know them again. It shows how the people of the Renaissance had a longing and intense interest in the Greek and Roman cultures and how the ideas of the past are not to be forgotten. It represents the humanist philosophy that the ancient world loved so much in that it values the teachings of the past, as opposed to others who found history useless before. Raphael demonstrates through his art that people wished to go back to the old but great society of ancient times. We can see the painting today as a depiction of a great desire for knowledge.