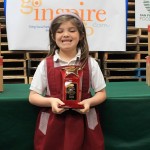 Phoebe Russell may look like your average 6-year-old Californian girl, but she’s done something bigger than what many accomplish in a lifetime. She has started and is leading a movement that has inspired many and has already fed 120,000 people who cannot afford a decent meal. Phoebe started this massive project when she was five years old while on the way to school. She saw homeless people on the street holding up signs asking for food, money, etc. When she asked her mother why people live that way on the street, her mother replied that they don’t have jobs, bad things had happened to them, etc. Since their family collected cans at home to turn them into cash, she asked why they couldn’t do that for the food bank. The mother, of course, was skeptical in a five-year-old’s abilities and expected to collect $700 maximum, but she let Phoebe pursue this. 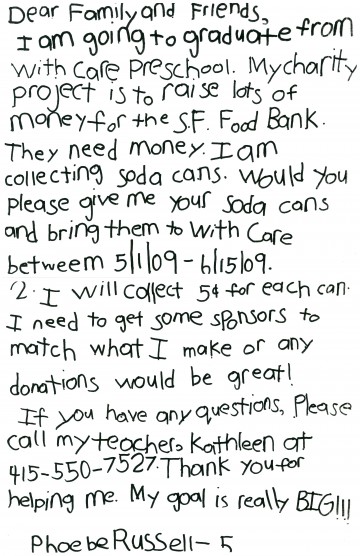 Phoebe then wrote letters out to different people – during free time, she would hand-write, sign, and send letters to family and friends. She had the goal of collecting $1,000. You may think this goal was ambitious and nearly, if not impossible, for a five-year-old. Despite these age barriers and such, Phoebe managed to collect $3,736.30 within two months, almost four times the original goal and enough to feed about 18,000 people. A video was then posted on GoInspireGo.com and it immediately went viral. Six months later, Gayle Keck, a Media Manager for the San Francisco Food Bank, announced the total for the entire project to be $20,202, enough to feed about 90,000 people! The video posted on GoInspireGo was later submitted to the Tyson Foods’ Hunger Relief Challenge. Phoebe then won this challenge as the “Tyson Hunger All-Star” which comes with a donation of 15 tons of chicken – enough to feed about 120,000 people!

Phoebe has shown me and thousands of others that age doesn’t matter when doing acts of kindness. Every action is like a quarter – no matter what state is on it or who gives it to you, it’s always worth 25 cents. Being rich or famous doesn’t really matter much either – the only difference is that the rich can donate much more money. The thing that matters is that people are kind and are willing to spend their time and efforts.

Phoebe also shows the power of self-esteem. Many children are not ambitious because they believe they cannot do much. One movie I watched involved a man trying to get a scholarship at a prestigious college. Out of hard work, he eventually did earn the money (but lost it) and his story earned the scholarship. He believed that he could earn money by doing a risky deed (gambling) but eventually succeeded. As my third-grade teacher said, reach for the stars. If you believe you can do something, just do it.

Phoebe may help inspire others to donate and ask others. Before reading this article, I would never think that I could actually get thousands and thousands of people to start doing something as simple as recycling cans. When we drank soda at a friend’s house, we threw the cans away. Imagine all of the other people in the world doing that. Before reading this, I wouldn’t have believed I could even get Frisco/Plano to give their cans to me. I’m not rich, famous, or old. Now I see that it’s possible to have a large influence regardless of age/status. If a six-year-old could do it, everyone else should be able to too.

Here's the video that won Phoebe the Tyson All-Star title:

Author's Note: This was another school assignment. But believe me, I still would have posted this amazing story, assignment or not!