The Vastness of the Universe in a Nutshell 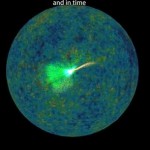 The universe is big. It's really hard to grasp the concept of the universe, though, since we have only been on Earth. Stars in the sky always seem so small. It's hard to imagine how big the universe is, so here's a helpful video I found by the American Museum of Natural History.

As you can see, the universe is quite big. A light-year is about 2.387 billion times the distance from Los Angeles to New York (in a straight line, of course). Imagine now 5 billion light-years. That's the approximate diameter of the entire universe.

As you can see, even the Earth isn't big -- less than a tenth of a second if light traveled around its circumference.

Stars, on the other hand, are huge. The Sun, a relatively small star, could hold around 1.3 million Earths. That's a LOT.

Betelgeuse, a red giant star about 640 light-years from Earth, is about 1,000 suns across. That's one of the biggest stars we know. Since it's that close, we can expect many more stars like that.

Enough talk. The universe is huge. If you saw the part where they zoomed out of the Milky Way, you can see how insignificant the Milky Way is to the rest of the galaxy. There are millions of galaxies out there that could be just like our Milky Way.

Look how small we are once again.

And you thought that the Empire State Building or the new skyscraper in Dubai was big!