What is The Game? 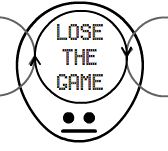 In other words, you just lost The Game.

This is probably the world's most infamous mind virus. Please feel free to infect your friends with this virus by either sharing this post or just simply telling them about it.

I first heard about the game while at the SMU TAG program. Everyone was saying, "I lost The Game" in class in unison constantly, so after about a week, I asked a friend what The Game was. He replied that "you don't want to know". After nagging him for a few seconds about it, he finally told me the rules of The Game, shown above. I immediately announced my loss, he did, then I was in on this mind virus.

According to one resource, the game was created in London. Nobody knows for sure, though.

By the way, this is called "ironic processing" -- where you think about something by trying not to think about it.

Here's the best resource on The Game: The Game

Oh, and to win The Game, you have to completely forget that The Game exists! Have fun doing that!