(no right-handed on Amazon) 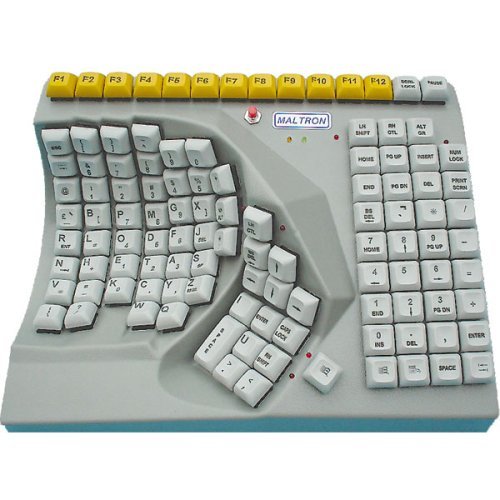 This odd keyboard by Maltron is built for the less fortunate who only have 1 hand. In my honest opinion, it looks like it's from the 1990s where everyone used white plastic for their computers. On their website, they state that speeds of up to 85 words per minute have been recorded on their keyboards. This is actually not a bad keyboard; it just needs to get a contemporary upgade. For $650, this keyboard is a ripoff unless you really, really need it. 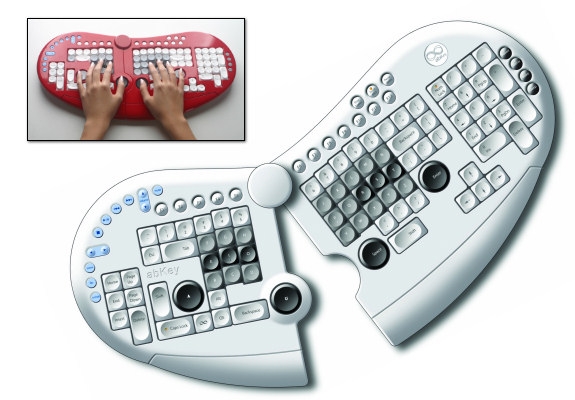 The creator of this "revolutionary" keyboard discovered the most common letters -- the vowels and R, S, and T -- by watching the Wheel of Fortune. Apparently, U, the 13th-most-common letter in the English language, gets a huge button for your left thumb. The A, Space, and Enter get similar enormous button treatment, while the letter "E" doesn't. Not so good now, huh? Get a load of this, though:

abKey® has been shortlisted as a finalist for the Red Herring 100 Asia Award for 2006. The prestigious award recognises the most promising companies in all of Asia, highlighting those who have shaped the future of technology innovation and transformed markets. Nominees were evaluated on financials, management, and overall strategic integration into the marketplace.

Really?!? Well, there are some good things about it. A great thing about it is the ergonomic "V" shape, which is the normal position supposedly. But the layout of the keys is just wack. They claim QWERTY is a curse; do some research on the Dvorak keyboard first! 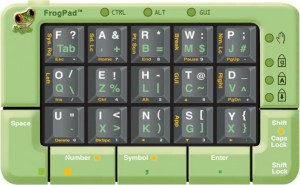 The FrogPad, according to the site:

FrogPad is a portable one-handed keyboard. It's practical, simple, and intuitive, 20-key text/numeric data entry design uses patented algorithms and ergonomic optimization providing all of the functionality of a standard keyboard. The full-size keys ensure accuracy, ease of use, and speed for all desktop and mobile computing applications.

You know, it doesn't sound half-bad. Too bad it's not that practical unless you want to eat with one hand and type with another. (I know you do too! ;)) The maker claims up to 40 wpm after 6-10 hours with this thing. I'm not really sure about that. The thing is, where did frogpad come from, anyways?

Besides the kiddish look, this keyboard has some major problems. First of all, they said the QWERTY layout was confusing. This, apparently, is arranged in a good order. To counter that, look at the placement of A and I! Anyways, apparently, QWERTY keyboards take up too much desk space and this solves many problems. Here's a few select testimonials from select sites:

It's a logical, simplified, more efficient version of the illogical, complicated qwerty
keyboard, a layout that takes less time to learn and less desk space. It's better in
every way, in fact."
--  Rupert Goodwins, ZDNet UK (Full Review)

"When I asked him which keyboard he liked better, he overwhelmingly chose the
New Standard Keyboard." ..... "This is a HUGE improvement over the QWERTY
keyboard."
--  Rich Smith, Developer Shed, Inc.(Full Review)

4 words. Give me a break. This keyboard isn't laid out properly! Anyways, order now for ONLY $70!

"Dangit! I keep slipping off the keyboard again with my sweaty hands, wrist, and arms! Heck, I'm all sweaty all together!" 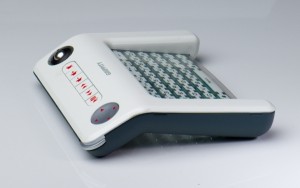 The Grippity Keyboard eliminates your fingers blocking the view of the keys so that you can actually see where you're typing! No more huge fingerss in the way!

Just kidding. Here's what the folks at Grippity have to say:

BackTyping is a brilliant yet simple ergonomic concept that allows full QWERTY typing in handheld devices. Typing as we know it hasn't changed since the invention of the typewriter machine, in 1867, 32 years before the U.S. patent commissioner declared "Everything that can be invented has been invented." Typewriter machines made a long way, from the desks of the 19th century to the living room couch of the 21st century, without changing too much. The struggle of a 19th century clerk, leaning forward to his 10kg machine has no place in your living room, pocket or even on your desk.

Also on the website includes the ergonomics of a regular palm. Think about it: what's more comfortable? A video game controller or a keyboard? This is what this manufacturer intends to solve. It actually doesn't seem like a bad concept. The hard part is the learning to type part, but other than that, it should be okay. The Grippity isn't on sale right now, but expect to see it in stores soon.

4. The iGrip Ergonomic Keyboard and Trackball 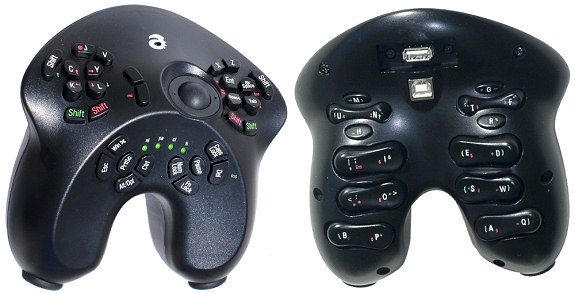 Lean back from your desk
Work and play how you want, where you want
Be comfortable and productive
Type 50+ words per minute from any location

50+ words per minute... that's a little unbelievable. How long would it to take to learn how to type on this thing, say 10, 20, 50, 100 hours to finally type that fast? It looks like a great way to play WoW or something except that it would be a little hard to get that trackball to your enemies during raids every time. What if you need to shout a quick "need heals" in less than 2 seconds while fighting a boss? You trackball down to your macro or type the number. That easy.

This wouldn't be half bad if it were easier to control. A lot easier. Who knows? I might be wrong anyways. 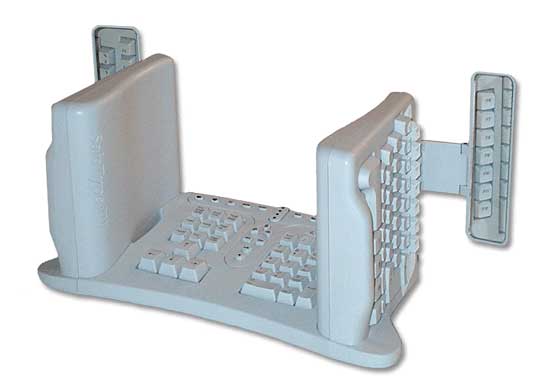 The World's Best-Selling (and probably only) Vertical Keyboard, available in black only hence the picture, claims that a neutral position is with your hands sideways. Today's keyboards, apparently, are not ergonomic, so what did SafeType do? They made the keyboard go skyscraper! Here's what they have to say about the SafeType:

Here's what I have to say about that. First, it moves the problem to your poor tired shoulders which'll probably die of having to hold them up to the keyboard instead of on a wristpad or desk. It does not eliminate extension-- what if you have a high desk? It does eliminate deviation from a normal posture. And I don't know what pronation is, but that keyboard's just prone to fall and break! It has side mirrors like a car or bus to help you learn how to type on this in 90 minutes. I don't really see how mirrors help anyways...

For $189, it's a steal. A steal of money that could have been spent on some other keyboard from you! 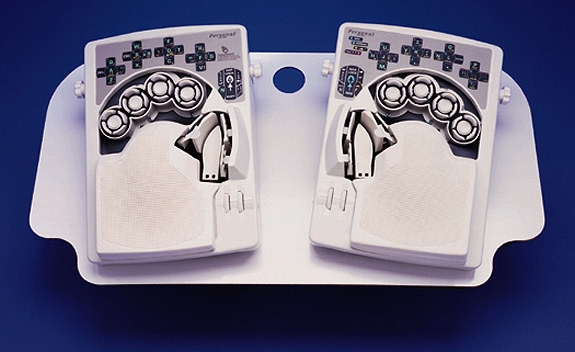 No, it's not a scale. No, it's not a superhero costume. No, it's not one of those fancy hand-scanners they use in Area 51. It's just a $1,300 data input device. Don't believe me? If you look a little closer, each one of those fingers have 5 keys on them. Also, the thumbs provide a spacebar. Supposedly, it's a QWERTY keyboard that doesn't look like a QWERTY keyboard. Weird, huh? It also can be used as a mouse, if that actually works.

1. The orbiTouch Keyless Keyboard and Mouse

Buy it on Amazon: orbiTouch Keyless Keyboard and Mouse

I know the other keyboards are weird, but this one doesn't even have KEYS! Or buttons! Or anything to press! Basically, to type, you slide the orbs into positions to create a letter. It looks more like a show-off device since it look so hard to use. It looks like it came from planet Zorg or something... at least it's ergonomic. Programmers and coders, imagine typing something like "if ($x === $y) {" on that. That'll end up causing more RSI because of how long it takes! From the website:

The orbiTouch® is a revolutionary keyless ergonomic keyboard solution that removes the barrier posed by the traditional keyboard/mouse combination. Persons who benefit include those with repetitive stress injuries such as carpal tunnel syndrome , other hand and finger injuries, limited fine motor skills, reduced finger function and other cognitive and physical challenges. The comfortable design of the orbiTouch® keyless ergonomic keyboard makes it the ideal tool for computing and accessing the Internet.

Cognitive challenges? This is a cognitive challenge! Anyways, this keyboard also doubles as a mouse, which is a bonus. It's a crapload of money, though, for a keyboard. Try coughing up the $400 to buy a device that won't even type fast enough. 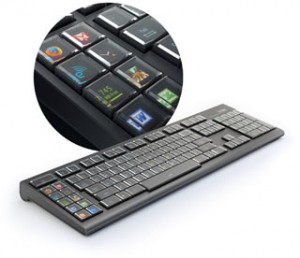 The Optimus Maximus Keyboard probably has the most screens out of any other keyboard. Heck, it's probably the only keyboard with at least 1 48x48 color LCD screen. Coming straight from the Russian designer Art Lebedev, this keyboard surely is one of a kind.

The left side can be used for a sort of Quick Launch pad to get to applications faster. It can also be used for choosing Photoshop tools, etc. It's completely customizable!

But with a great keyboard comes a steep price. The keyboard costs $1,600 on ThinkGeek.com, enough to buy a brand new laptop of spectacular quality.