You all know My Life is Average, right? If you've noticed, they talk about two websites: Google vs. Yahoo Wars and Mystery Google. But did you know that Mystery Google is going away for good? Why? Because of Mystery Missions!

Mystery Missions is a site where users are able to post their own missions for others to do for the day, from texting someone to cheer them up on Valentine's Day to texting a Harry Potter spell to being a ninja for a day to brushing your teeth. (I know it may not sound all that great to some of you, but come on, doesn't everyone like ninjas?) 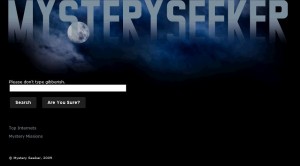 Anyways, to get assigned a mission, you must go to the "Headquarters" screen and click "Request". Here you find a mission submitted by a user and can choose to either accept the mission or pass it up. Missions range from fun to boring and can involve just about anything. Some people create missions for their own gain, such as sending a text message. Some use missions to have people just do plain fun things, though.

Here's a funny one: "Google is anti unicorns found out why. Search 'unicorns w' and be surprised." The answers are surprising.

To submit a mission, click the "Submit" button on the "Headquarters" page. Missions can be just about anything, as stated above. Just make sure you don't post emails or phone numbers without permission!

A detailed list of all your current missions and submitted missions can be found on the "Profile" page.

Mystery Missions also provides a custom-designed forum full of hundreds of active agents. Get to know your community there!

Overall, Mystery Missions is a great site to just relax, have fun, and get laughs. This is one of those sites to go to when you get bored. The largest downside to this site is the (in my opinion) horrible interface, but other than that, it's very fun, engaging, and probably the most interactive site on the Internet.