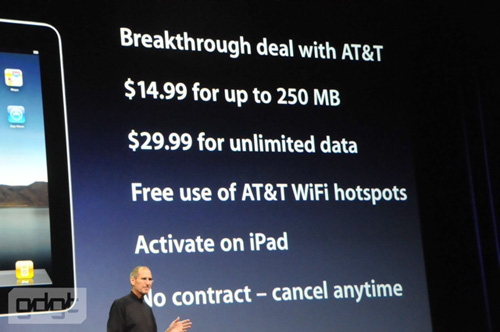 It's happening all over again. The complaints. The bashing. The jokes. But we all know that once the iPad does come out in March, and people start to line up to get their iPads, and people go home and play Giant Doodle Jump or something on their new "Pads", we'll have the iPad websites starting to open up all over the place. (Here's a prediction: iPadIllustrated.com -- your source for iPad related technologies.)

The iPad, which is basically the iPod Touch gone supersized, is a tiny computer with about the same sized screen as a netbook (9.7") and half an inch thick. Its irremovable battery reportedly lasts 10 hours while doing who knows what and a month of standby. It will come in 16GB, 32GB, and 64GB sizes and range from $499 to $830. Many would (especially now) consider the iPad to be useless, or at least not worth the $499, but I disagree.

Critics rave about how a netbook is better for $499 -- faster, more apps, better. The problem is, the iPad was not intended to be a replacement for the common netbook; the iPad blurs the line between mobile device and tablet/netbook.While the iPad does have basically the same functionality as the iPod Touch, it still is faster and can open up new multitouch possibilities.

There's only so much functionality that can be fit onto a tiny 480x320 resolution screen. With a 1024x768 screen and a custom-made 1GHz processor to create better software, the iPad will be able to do so much more but still offer a netbook's portability.

iWork apps are estimated to cost about $10 a piece, much less than Word's 4 for $300 Ofice Student Edition. I don't know of any other mobile devices that support document creation built for a multitouch screen. There's Windows mobile, but it isn't multitouch. Word 2010 isn't built for multitouch. Therefore, this'll be great.

The problem is, it'll be very hard to type using a virtual keyboard. That's why Apple is also offering a keyboard dock that doubles as a stand. But once you do this, I can't imagine how hard it it would be to see the screen's bottom while your fingers are right above it.

Many are also talking about this being the Kindle killer. That's BS. First of all, it sucks as an e-reader. Say you're reading a book in the park, or more realistically, the train to work (not me) or just outside. The glare from the solid glass screen will probably show you the sky most of the time, so unless you turn the brightness all the way up to maximum, you won't be able to read in peace. More to that, the iPad will most likely default to half brightness, so if you turn it all the way up, Steve Jobs's 10 hours will turn into 5 hours when new, 1-2 hours after a year of use.

The e-books are in color, I know, and the iPad has a backlight, I know, but the whole point of not having a backlight was to let you read outside. The Kindle, Nook, and Sony e-readers all use e-ink which uses up much less energy. (The only energy actually used is with turning a page and the wireless.) The 3Qi screen is coming out soon, if you've heard of it, so it'll be in color.

Who needs video and audio for $5 more per book anyways? The reason people will use it is out of convenience. Word will go around though that the screen is hard to read on in the park and it doesn't last very long. And the backlight issue: didn't your mom ever tell you not to read in the dark anyway?

Youtube looks like it'll be great on this device; if it gets Netflix, I'm going to jump out of my seat and preorder it. Too bad that probably won't happen. Unfortunately, 16:9 widescreen won't be supported.

The screen look like it could also work for web browsing.

Here's for fun: I actually heard someone talk about  using Skype on this thing. Imagine talking into a huge thing like this. Sorry, it made me crack up... :p

So, in conclusion, here are the major product wins and fails.

Overall, I think that the iPad isn't exactly worth it at the moment. Hopefully I'll get one for Christmas, if there isn't any competitor out there to stop me. I also might get a Nook, but I don't know what's coming out yet. Nobody can determine the outcome of the iPad yet, but I think it will be a smidge less successful than the iPhone's start.

Special thanks to Wizkidweb's helpful blog post that inspired me to write this. Sorry for stealing your title and pictures!

It's nothing like a netbook: no CD drive, no USB ports, etc.But it's not fair to compare it to a netrr