The Origin of the Pinky Promise/Pinky Swear 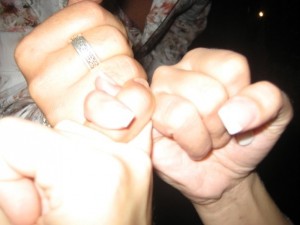 Most of us have heard of the pinky promise or pinky swear. To those of you who don't know, you may be wondering, what is a pinky swear? Basically, it is the act of hooking pinky fingers together to seal a deal or promise. In some areas, people kiss the hand to seal the deal. It is also possible for the swear to go three ways, as shown on the right.

Traditionally, the swear is considered the highest promise of all promises and the pinky wuld have to be severed if the promise was broken. In modern times, this is much more informal and common among school-age children and close friends. The pinky swear cannot be broken or countered by crossing of the fingers, either. It can only be broken if all parties agree or the majority agree to break it.

For all you manga lovers out there, this most likely comes from Japan. In anime, this is called a yubikiri (指切), Japanese for "Finger Cut-off". (For those of you who know of hara-kiri, that also involves cutting. See the similarities?) Apparently, it is common in manga and even has a Japanese word for it. For this, I believe it to come from Japan.

Don't quote me on it, though!

If you think you know where it comes from, tell us below!