A snow day in Frisco, TX 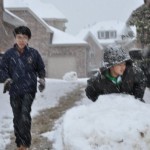 Yesterday, today, and the day before yesterday, there was actually snow in Frisco, Texas! I don't mean the usual 1 inch of snow, but a freaking 4 inches! Amazing, right?

But do you know what's even more amazing? My brother and I built a huge tower complete with a staircase!

The tower was approximately 3 meters tall and made completely out of snow. It took 7 man-hours of development.

What was the process in building this monster?

First, we started way in the backyard (shown in the picture at the bottom-left) and rolled a huge snowball to make our base. (above picture) Then, we packed snow under it to keep it from rolling around. After that, we started to make a snowman. The snowman never really worked out, so we decided to build a tower.

We did build the tower on the first day of snow, but overnight, the whole thing fell apart.

Later, we decided to build a staircase out of snow since our dad wasn't helping us anymore because of his work. The staircase, I repeat, was made completely out of snow and each step could support my whole weight.

We made the tower a little bit shorter than it is in the picture then went inside to eat lunch.

Going back outside, we learned that the whole top half of the tower had been destroyed. I then alone rebuilt part of the tower and added two new steps to the staircase. After that, my brother came outside and started to hand me snow so I wouldn't have to keep going down and up over and over again. Eventually, though, my brother took a long 30 minute break so I built the rest of the tower to what is is now.

(By the way, my brother was trying to climb up the steep front side of the sculpture and eventually succeeded.)

After all the muddy work, we finally took a break, took our showers, and fell asleep. Today, it is still standing tall and proud. :)