A Comparison of Animal Farm and Lord of the Flies 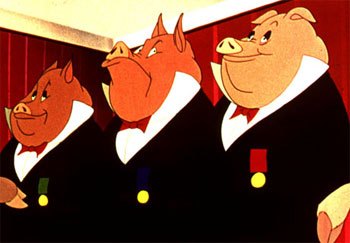 At times, the authority of a group of people becomes displaced due to discontent among the populace.  When this vital authority is removed, another one must take its place in governing the body.  George Orwell and William Golding both illustrate different outcomes of such a situation in their novels Animal Farm and Lord of the Flies respectively.  In both stories, a stable government is replaced by a volatile, even hostile environment.  These books share the same concept in that a new government can easily appear to be better than the former one, when in reality it could be much worse.

In both stories, the former government is seen as absolutely necessary to take down, no matter what the cost.  Mr. Jones of Animal Farm delegates many strenuous tasks to the animals of his farm including pulling carts, sowing, laying eggs, etc. but keeps the profit to himself.  Naturally, the animals do not like being bossed around and therefore become very angry and designate Jones as an enemy to their welfare.  The only thing on the animals’ minds is to overthrow the terrible leader of the farm, not thinking of what they would do with power in their own hands.  In Lord of the Flies, Ralph gives the job of tending the fire going to some of Jack's hunters, only to become furious when they let it go out, missing a possible chance of rescue.  The children only do what they find fun, making them rebel against Ralph's logical way of managing things.  Because they dislike following their jobs assigned by Ralph, they blindly migrate to Jack’s side, advertised as the opposite of Ralph’s tribe -- fun.  The desire for change, as shown here, blinds the intuition of people on who is right, causing them to rebel harshly against authority.

Even when the leaders of both groups become as terrible or even more terrible than the previous leaders, the people still comply with the new standards.  When Napoleon kills some supposed traitors, other animals question Napoleon but do not stop him from killing.  Napoleon, showing off his attack squad of dogs, effectively stops opposition, controlling his subjects through fear.  Because the animals are so afraid of Napoleon’s strength, they accept Napoleon’s beliefs.  In Lord of the Flies, when Jack tortures Robert, Roger, unsure of if the torture was ethical, just goes along with it.  Roger, along with many other children on the island, wants to fit in  and obeys Jack out of a lack of a better option.  The children despised the logical, rule-based society of Ralph and just went with the only other option, driven by a desire to have fun and play.  Although a leader may seem attractive because they are different than the old leader, the new leader could be as bad as the former one.

When the new government gradually becomes a violent, turbulent society, the citizens begin to follow the new government with the idea that the former society was worse.  In Animal Farm, Napoleon often conjures outrageous rules, telling the animals to follow or Jones would come back; the animals of course comply.  The vision of the past society is unclear, so the animals accept this new society, assuming their past government was worse.  Despite what the new society would become, the animals just let their issues be and were glad to not have the old society.  In Lord of the Flies, Piggy is killed after being crushed by an intentionally dropped boulder, and the members of Jack's society do not even question the murder.  As innocent children, members of Jack’s tribe likely wonder if it were moral to kill enemies.  Because the new society allows killing and promotes it, the children never speak up and just accept it to be part of the society.  A new society of change appeals to the people -- even if the changes are worse -- because they automatically view a different society as a better society.

These two stories illustrate well that a new society can often bring change that makes the society worse than what it started as.  While it may seem attractive to get rid of the evils of a current government, a new, but more evil government may emerge.  Change does not necessarily mean for the better. These books firmly illustrate the fact that a different society is not always a better society.