The MOST POWERFUL Camera Lens EVER Created - A 5200mm Canon lens

Yesterday, I was randomly browsing the internet when I came across an amazing 5200mm Canon lens. The lens apparently is the largest in existence, second only to telescopes. Wow.

From a Canon flyer:

This is the only ultra-telephoto lens in the world capable of taking photographs of objects 18 to 32 miles away (30km to 52kms away). Having a focal length of 5200mm, Canon Mirror Lens 5200mm can obtain one hundred times as large an object image as that of a 50mm lens.

For focusing this mounted or fixed lens on an extremely distant object, two aiming telescopes are set on the side of the lens barrel, and the entire lens is placed on a rigid stand which rotates smoothly. Minimizing the overall length had been a big problem in designing this lens. However, the Catadioptric system that is applied to the other two Canon mirror lenses (Canon 800mm f3.8 & 2000mm f11) has succeeded in reducing it down to one third of the nominal focal length. In general focal length and optical aberration increase with each other, however, our long and persistent research and development have succeeded in solving this problem. Canon mirror lens 5200mm composed of spherical main and secondary mirrors and a correction lens would assure you of clear images.

Here's a video of the massive lens in action.

As you can see, it's so huge that it even needs a stand. You can see that the videos it takes are incredibly far away. That's not even the full range of the lens. According to the flyer, it can zoom in 18 - 32 miles away!

Here's an advertisement from around the time it was made. 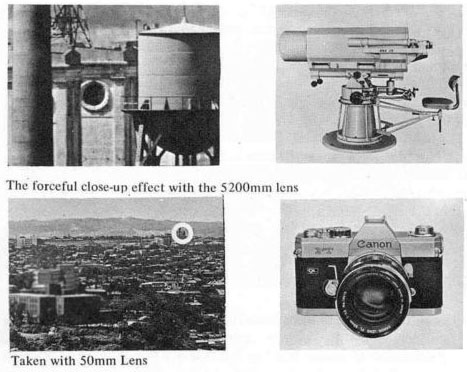 Now this is one cannon. (No pun intended.)